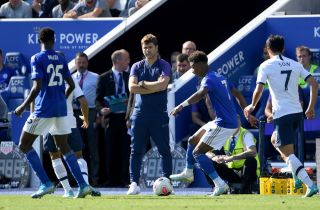 Tottenham boss Mauricio Pochettino believes the VAR decision to chalk off a second goal at Leicester contributed to their late capitulation in a 2-1 loss.

Spurs, already leading through Harry Kane’s first-half opener, looked to have wrapped up the points when Serge Aurier fired in midway through the second half.

But, after two minutes of deliberation, VAR ruled that Son Heung-min was millimetres offside and it was disallowed.

Leicester, who had also seen a first-half goal ruled out by the decision-checking system, levelled two minutes later through Ricardo Pereira before James Maddison’s first goal of the season claimed the points in the 85th minute.

“I’m not going to talk,” Pochettino said. “I’m only going to say that we all accept that system in the game and now I am not going to complain.

“I am going to accept that maybe if you are going to say it’s offside or wasn’t if it wasn’t clear, but I trust in the referees and if the referees say it was or wasn’t I’m not going to complain.

“I think we need to analyse the game in a different way and not include the VAR.

“We need to accept that it’s completely fair, the rules. I’m not disappointed with that, I’m disappointed because we conceded two goals and the emotion of the game changed.

“Giving that decision to Leicester made that thing happen in the last 10 minutes.

“That is normal that it changes the emotions. For us it was a massive disappointment and for them it was a massive belief for all the people and fans to keep pushing and they found the way to score a goal.

“In the end, we all thought it was going to be a draw and the goal appeared from long distance and it killed our feeling.”

Leicester were cursing VAR in the first half when Wilfred Ndidi’s goal was ruled out for offside and soon after they were behind after Kane produced a brilliant finish.

It might have been game over when Aurier drilled home, but instead it was Leicester who took the points when Pereira fired home at the back post and then Maddison stuck one in the bottom corner from 25 yards.

Foxes boss Brendan Rodgers was pleased with how his side reacted to the VAR drama.

“I don’t think it was massive (moment in the game), it depends how you take it,” he said.

“We have spoken a number of times with our squad in terms of how we react.

“It is something that is new into the game I thought the focus of the players was very good. It stays 1-0 and you still have to play with confidence and quality. Mauricio would have been happier with 2-0 than 1-0.”

Leicester have taken 11 points from their opening six games and look a good bet to challenge for a top-six finish.

Rodgers is not getting involved in that talk just yet, though.

“We are six games in, we are not getting carried away,” he said. “We knew we had a tough start: Chelsea away, Manchester United away, Tottenham at home.

“We have had a tough start but we are so pleased with the focus of the players, at this moment we are only focusing on the performance – where we are at in the table, in February and March – but at the moment it is about improving our game.

“Today against a top-class side we were fantastic.”