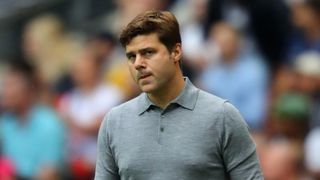 West Ham defender Jose Fonte has revealed that Mauricio Pochettino uses cameras "everywhere in the training ground" as part of his approach to monitoring his players.

Fonte played under Pochettino at Southampton in 2013-14 before the Argentine coach joined Tottenham, where he has built one of the Premier League's best teams.

In an interview with the BBC, Fonte described the unique attention to detail that he feels sets the Spurs boss apart from his peers.

"Everywhere in the training ground there are cameras," said Fonte, who played in West Ham's 3-2 home defeat to Spurs in September.

"If he was giving the bibs and you were not in the team, and your body language was bad, he would call you in the office and say 'Listen, this is not the right way'.

"In the canteen? Everywhere. He is watching you everywhere, your body language, everything.

"He is meticulous, his attention to detail is second to none. He would watch everything you do."

Spurs are currently unbeaten in nine matches in all competitions – a run that stretches back to August 27 – and Fonte said Pochettino strikes the right balance when it comes to player morale in order to achieve results.

Pochettino guided a Southampton team featuring the likes of Fonte, Adam Lallana, Luke Shaw and Dejan Lovren to eighth place in the Premier League in 2013-14 - the club's highest top-flight finish in more than a decade.

"He would put an arm around you and make you feel special. It's good," said Fonte.

"I remember Luke Shaw was like a son to him. Adam Lallana, Dejan Lovren and myself all had a great relationship with him. He was tough as well when he had to be."