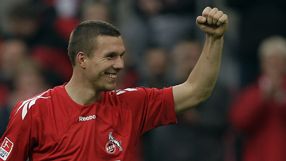 Edin Dzeko, last season's top scorer, rescued a point for VfL Wolfsburg in a 1-1 draw at St Pauli in Sunday's other game with his ninth goal of the season.

Podolski fired his spot-kick into the top right hand corner after Milivoje Novakovic had been fouled by Georg Niedermeier as the pair tussled for the ball.

Angry Stuttgart players argued with the referee at the end after having two late penalty appeals turned down.

The win, only Cologne's third in 13 Bundesliga games, took them on to 11 points, level with Stuttgart - who have a better goal difference - and one ahead of Borussia Moenchengladbach, who replaced them at the bottom.

Borussia Dortmund lead the table by seven points from Mainz after their 2-1 win at Freiburg on Saturday.

Ciprian Marica and Cacau both missed good first-half chances for Stuttgart while Martin Lanig slid the ball wide from close range for the visitors.

Cologne had the better of the second half with Podolski leading their attacks. He was denied by goalkeeper Sven Ulreich after breaking down the left and shortly afterwards fired over with Novakovic free in the middle.

St Pauli, who had lost their previous four games, went ahead with a Markus Thorandt header in the 28th minute against former England manager Steve McClaren's Wolfsburg.

But the 2008/09 champions, with only one win in their last seven games, levelled after nine minutes of the second half when Diego headed into the path of Dzeko.

The Bosnian fired in from 10 metres to leave Wolfsburg 11th with 15 points and St Pauli 14th with 14.