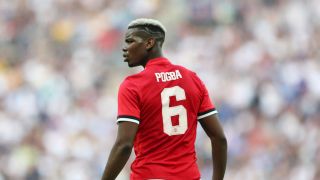 Manchester United midfielder Paul Pogba has admitted to having "some small issues" with Jose Mourinho during the 2017-18 season.

The France international, who has started both of his country's games at the World Cup, endured a difficult season at Old Trafford, with Mourinho naming him as a substitute on a number of occasions towards the end of the campaign.

Rumours of a rift between himself and Mourinho were a constant presence for the final few months of the season and now Pogba has confirmed that they did not always see eye-to-eye.

However, he was quick to brush them off as nothing major and believes his difficulties will stand him in good stead for the rest of his career.

"This year was a better season than last year as I was more decisive," he told a media conference at the World Cup.

"It's also true that I had a big injury. It's experience. There were little issues with Mourinho, but they were nothing.

"These are things that make you grow. I never had a season where I was pushed aside, or they put me on the bench.

"It is also the choice of the coach, it's his job, I must accept, as I always said, the only answer is on the pitch."