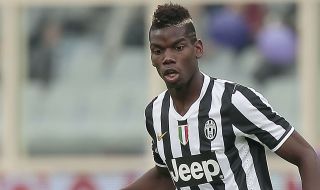 Pogba, 20, has been linked with a move away from Turin, with Chelsea and Paris Saint-Germain said to be interested in acquiring the talented midfielder.

The former Manchester United man still has over two years left on his current deal with Antonio Conte's side.

And club direcor Giuseppe Marotta is adamant that Pogba will agree to an extension, despite the speculation surrounding his future.

"Pogba is happy at Juventus and he has no intention of leaving," he told Sky Sport Italia.

"We will soon meet with the Frenchman’s agents to extend our agreement and, at the same time, give him a pay rise for the growth he has shown."

Conte and Juve midfielder Andrea Pirlo were both recognised by FIFA earlier this week, as they were named on the Ballon d'Or shortlists for coach and player of the year.

Pirlo was the only Serie A player to receive a nomination, and Marotta expressed his pride at how the 34-year-old has turned his career around since joining the club after being released by Milan in 2011.

"We are proud," Marotta added. "We re-launched Pirlo and that fills us with joy.

"As for Antonio, he is a young coach, an emerging one and the fact he is included is a motive of honour for all of us."