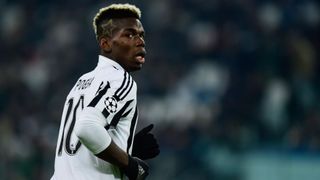 Pogba is set to be left out for the quarter-final tie at the Stadio Olimpico, with Allegri likely to make a raft of changes as he attempts to refresh his starting XI as Juve still compete on three fronts this season.

It means midfielder Hernanes will come in to face his former club while Simone Zaza will also get a chance in attack.

Allegri said at Tuesday's news conference: "Wednesday's line-up will be the best I can pick for the game. We have many matches to play in a short space of time.

"We'll play a decent line-up in order to try and get through to the next round.

"Hernanes will replace [Claudio] Marchisio in theory. As for [Leonardo] Bonucci and [Giorgio] Chiellini, I will see.

"Paul Pogba has played in practically all of our games so far. [Kwadwo] Asamoah did well on Sunday [a 4-0 win over Udinese] and came through unscathed.

"The team has given no signs of weakness, even with many changes. Tomorrow the best team will go out onto the pitch, also with Sunday's game [against Roma] in mind."

Juve have enjoyed a resurgence in Serie A in recent weeks, moving up to second place, two points behind leaders Napoli.

And with a Champions League clash with Bayern Munich looming large, it would be easy for the Bianconeri squad to lose focus, something Allegri is determined will not happen.

He added: "We're still in the running on three fronts but haven't achieved anything. We must keep working and picking up points."

Juve made their first move in the January window on Tuesday, completing the signing of Rolando Mandragora from Genoa, although he will spend the remainder of the season on loan at Pescara.

"Mandragora is a talent and the club is operating well in this respect. He will remain with Pescara for the time being," said Allegri, who has no intention of losing Zaza, despite the striker being linked with clubs in England and Germany.

"Zaza will not be leaving the club, he's staying with us," said the former AC Milan boss.

""Our goal is to improve both in attacking and defensive phases. And we must improve."

The winner of Wednesday's tie will face either Napoli or Inter in a two-legged semi-final.

Alessandria overcame Spezia on Monday and Allegri was full of praise for their achievements.

"I compliment Alessandria, they deserve it," he said. "In England this happens often and it's the beauty of the competition."