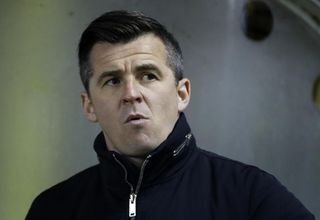 Police have appealed for fans who may have filmed an alleged confrontation between Fleetwood boss Joey Barton and Barnsley counterpart Daniel Stendel to come forward.

South Yorkshire Police launched an investigation into an alleged incident in the players’ tunnel after the Tykes’ 4-2 Sky Bet League One victory over Barton’s side on Saturday.

Now they are calling for witnesses who may have captured what happened on mobile phones to assist.

A South Yorkshire Police statement said: “Police investigating reports of an assault at Barnsley Football Club on Saturday 13 April are appealing for witnesses as enquiries continue.

“The incident is believed to have taken place in the tunnel around 5pm, following the conclusion of Barnsley’s match against Fleetwood Town, and left one man with facial injuries.

“At this time, no arrests have been made in connection with the incident.

“Were you at the game on Saturday with a view, or in the area, of the tunnel? Did you see what happened?

Barnsley announced on Tuesday that they had lodged formal complaints with both the English Football League and the Football Association over the alleged incident.

Stendel did not appear at the club’s pre-match press conference on Wednesday morning, but assistant Dale Tonge insisted he was in good spirits.

Tonge, who began by reading a prepared statement in which he said he could not comment on the allegations currently under investigation, said of Stendel: “He’s in great spirits. We had a great win at the weekend.”