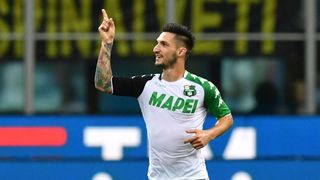 Inter Milan have confirmed the signing of Matteo Politano from Sassuolo on a one-year loan with a right to buy next season.

The 24-year-old is the Nerazzurri's fourth signing of the summer transfer window following Radja Nainggolan, Stefan de Vrij and Roberto Gagliardini to San Siro next season.

Politano scored 10 league goals for Sassuolo in a breakout 2017-18 season where he earned his first call-up to the Italian national team, and the attacker can't wait to get started with Inter.

"Being here is wonderful and it’s a very important day for me," Politano told Inter TV.

"I am really excited and can’t wait to get started. I thank the chairman, club, directors and coach who wanted me here, and I also thank Sassuolo for allowing me to grow and for giving me the opportunity to join Inter.

"San Siro is a stadium that gives me goosebumps and in the past it brought me good luck, as I scored here against both Milan and Inter… but now I hope to score here for Inter."

Meanwhile, Danish forward Jens Odgaard has moved the other way, having joining Sassuolo on a permanent deal from Inter, who have buy-back clauses installed for the 19-year-old.