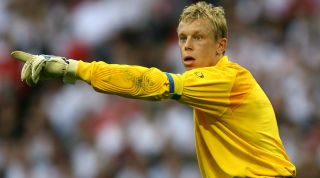 Roy Hodgson takes his Three Lions to Tallinn for their third match of Euro 2016 qualifying following Thursday's 5-0 victory against San Marino, on the same night that Estonia conceded a 76th minute goal to lose 1-0 in Lithuania.

And current Estonia goalkeeping coach Poom – who enjoyed spells with Portsmouth, Derby, Sunderland, Watford and Arsenal – says the Baltic nation will be aiming to restrict the visitors' frontline with well-organised work at the back.

"We need to go defence first in our thoughts," he tells FourFourTwo. "We must be really organised, disciplined to help each other fight for every ball, and rely on our confidence. We know the quality of England’s players, especially the speed of their attackers. You have to make sure we don’t give them much space and be compact.

"We are not going to target one thing in particular against them; everybody knows they will be big favourites coming to Tallinn. For us it’s really important to try to stretch the game. Anything we can get is a bonus.

"Obviously England's team talisman is now Wayne Rooney, the captain. When I played last time there were maybe more players who had made a name for themselves, more big-name players like David Beckham, Steven Gerrard, Ashley Cole and John Terry, who was the captain then.

"Those are all retired from international football now, so these are new times for England. They have a very talented group. English fans had the disappointment of the World Cup but they have something to look forward to in the future. These young players can only get better."

Estonia, ranked 81st by FIFA, enjoyed a winning start to qualifying with a 1-0 win over Slovenia. With two teams qualifying automatically and a third going through to the play-offs, Poom admits the Blueshirts are daring to dream – if cautiously.

"The chance is always there," he says. "We had a great result in the first game against Slovenia, which many people didn’t expect. We would have been happy with a draw but we managed to turn the play to our advantage and they had a man sent off, so to get the three points was a fantastic start for us."

Poom leads a busy life these days; after retiring at Arsenal in 2009 he assisted Gerry Peyton on the Gunners' coaching staff to get his badges, before moving back to his home nation in 2010.

"It was easy to be a footballer!" he jokes. "But I am enjoying it obviously. It keeps me in football at the top level, international level, which is obviously the pinnacle for every footballer or coach.

"I am also working with the FA doing some goalkeeping coach education, and I have my own soccer school. It’s interesting and rewarding to work with kids. I enjoy it but it’s a lot of work. It’s not only the soccer school or youth club, though, it’s a lot of other goalkeepers; we’ve got eight teams, and I look after them all."