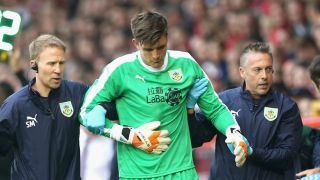 Nick Pope will see a specialist to examine the extent of a shoulder injury and Robbie Brady has sustained a hamstring concern of his own, Burnley boss Sean Dyche has confirmed.

Reports have suggested the goalkeeper, part of England's squad at the World Cup, could be out of action for several months.

Pope suffered the injury in the first leg of Burnley's Europa League second qualifying round tie at Aberdeen on Thursday, where substitute Sam Vokes hit a late leveller to secure a 1-1 draw.

After Burnley drew 0-0 with Montpellier in a pre-season friendly on Sunday, Dyche confirmed Pope's shoulder was dislocated, although he remains unsure of the seriousness of the injury.

Gutted to have picked up the injury last night on such a special occasion. Would like to say a Massive thank you to the staff at and Aberdeen hospital for looking after Me. 27 July 2018

"He sees the specialist tomorrow [Monday]," said Dyche. "It's a definite dislocation, we know that, but it's the grading of it and how the specialist views it.

"Once he's seen the specialist, we will have a much better view. We will wait and see on that and we have no timescales at the moment."

Republic of Ireland winger Brady started the Montpellier match but was withdrawn shortly before half-time after feeling tightness in his hamstring, Dyche added, making him a doubt for Aberdeen's visit.

Pope's big chance in goal for Burnley came in September 2017, when Heaton suffered a dislocated shoulder in a Premier League game at home to Crystal Palace, and he remained number one for the rest of last term.