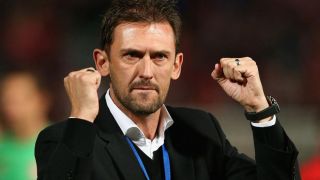 Goals in either half from Youssouf Hersi and Iacopo La Rocca at Pirtek Stadium on Saturday night saw the Wanderers outlast the Mariners in a replay of last season's Grand Final, setting up another opportunity for the league's newest club to be crowned champions in just their second year since inception.

"We are (stronger) in a few different areas," Popovic said when asked about the changes in his side over the past 12 months.

"Last year we had injuries, suspensions and a few coming back from injury. Also the ACL (AFC Champions League) has maybe made us mentally tougher

"We have always been mentally tough, but there is a real resilience about this group now."

The travel-weary Mariners forced the home side to work overtime for the prized ticket on offer to the season decider, in what was yet another tight and tense match-up between the pair.

Popovic said the manner of the win was yet another sign of his side's progression.

"In another big game that they could produce," the Wanderers boss said when asked what about the most pleasing aspect about his team's performance.

"It shows how far they have come. This was a big pressure game, they stood up and defended when they had to, and were very resolute.

"It was tough typical semi-final, with not an inch given from either team.

"I thought in the first five or ten minutes we were a bit shaky, and Central Coast started well. That is maybe another sign of the improvement in the team, we didn't panic and remained patient.  Getting that first goal gave us the belief.

"You can see they (Central Coast) have got experience in a lot of big games, and we had to play extremely well to get the win. They played their part out there.

"I'm just delighted for the whole playing group, the whole club from the chairman down, the staff, the fans."

One player that is unlikely to feature next Sunday is Mark Bridge who Popovic described as "a big doubt for the grand final", with the experienced forward limping off in obvious pain during the second half with an ankle injury.

With the pain of a grand final defeat tucked away in the back pocket, Popovic said he is delighted that his charges will have the opportunity to exorcise last year's demons.

"I'm happy they get another chance straight away," he said. "It is not easy to get that. Players can miss out on a grand final and can think they will do it again, but their career can be over without another chance. These players get another opportunity one year later.

"This time we have to perform better. If we perform better I'm very confident we give ourselves a very good chance of holding up the trophy this time."

Popovic was reluctant to name a preferred opponent for next Sunday, saying it won't make much difference in terms of the planning, although he conceded a home Grand Final would be desirable.