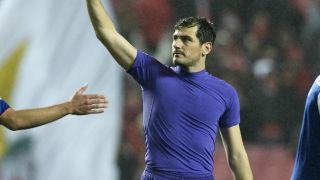 Spanish newspaper El Confidencial reported that Pinto da Costa was critical of the former Real Madrid keeper, but the club chairman spoke via the club's official website to deny the claims.

In fact, Pinto da Costa claimed that the club was in the process of extending the Spaniard's contract.

"Now it's on [Casillas] to decide, the deal is done on our end, we told them to sign whenever they want to," he said.

Pinto da Costa went on to further dismiss the report, saying: "That news made me laugh, as it states that I had dinner at the home of a great fan of the club, and a friend of mine, Jose Manuel de Mello.

"Problem is I have never even met the gentleman, and, according to what I was told, he passed away a couple of years ago, unfortunately.

"I never had dinner, or lunch, with the deceased – I actually would like to, with a few, if I could – which proves this is absurd."