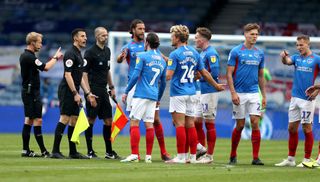 Portsmouth goalscorer Ronan Curtis claimed the officials “did not help us” after his side were held to a 1-1 draw by Oxford in the first leg of their League One play-off semi-final at Fratton Park.

Curtis’ 14th goal of the season looked to have set Pompey on course for their first ever play-off win at the seventh time of asking only for Marcus Browne to equalise for Oxford.

Pompey had a strong penalty appeal turned down in the first half when Christian Burgess appeared to be dragged to the ground by fellow defender Rob Dickie.

Republic of Ireland international Curtis said: “We have waited three months for this game and were unlucky. We wanted to get the win but it was a shambles!

“We had three or four penalty shouts and with the one at the end the defender clipped my heels so it is either a yellow card to me for diving or a penalty.

“We battered them the whole game and deserved more out of it but the referee and the linesmen did not help us.”

Portsmouth manager Kenny Jackett believes playing away in the second leg will not hinder his side.

Jackett said: “We were pretty strong tonight and we need to replicate that on Monday and go again.

“It was evenly balanced and if you look at the results since football restarted, there has not really been any home advantage. The team who plays better on the night will win.”

Pompey looked the sharper team for much of the first half and Curtis rattled the post with only six minutes played.

The hosts took a deserved lead in the 32nd minute when Curtis’s drive squirmed past Oxford goalkeeper Craig Eastwood at his near post.

Clear-cut chances were at a premium in the second half, leaving the tie evenly poised ahead of Monday’s second leg at Oxford’s Kassam Stadium.

Oxford boss Karl Robinson said: “They started the game with so much energy and intensity and we had to ride the storm in the first 20 minutes.

“It was the typical first leg of a play-off game and nobody wanted to give too much away.

“They think they could have had one or two penalties, based on what they were shouting on the touchline.

“They should have had one in the first half when Rob Dickie got hold of their player around the back so they will feel a little bit unlucky.

“I didn’t think the referee had a great game but just as players are struggling, referees will too, having not officiated for a long time.”