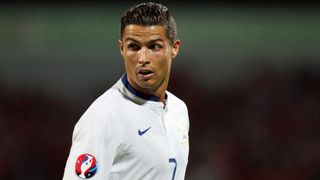 Bruno Alves wants Portugal to send out a statement as they look to seal their spot in Euro 2016 when they take on Denmark.

Fernando Santos' side need only a draw in Braga on Thursday to guarantee their place at the finals in France next year, while a win would ensure they finish top of Group I.

Despite victory not being essential for Portugal, Alves has urged his side to deliver a performance which will make the rest of the continent sit up and take notice.

"It's a good game to show our quality and reach the goal of getting to the European Championship," said Alves, as quoted by A Bola.

"We're looking for a good result. We already have experience playing Denmark, but the important thing is to focus on our own work."

Denmark are three points behind Portugal and just one clear of third-placed Albania ahead of the clash, having played a game more than both, and need a win to put pressure on Gianni De Biasi's men in the race for the automatic spots.

The Scandinavians are unbeaten in their last four qualifiers and have not conceded in three of those games, but striker Nicklas Bendtner has called on his team-mates to improve their attacking play after they were held 0-0 by Armenia last month.

"We must be honest and say we have not created enough chances. In the Armenia game, we only had one shot on goal in the entire second half. That's not good enough," the Wolfsburg man said, as quoted by Fyens Stiftstidende.

"The positive is that we've kept a clean sheet in the last three games. We've done our job defensively. Now it's time to get offensive."

Cristiano Ronaldo scored the only goal of the game as Portugal won the reverse fixture in Copenhagen last October, and Thursday's hosts have lost only three of their last 15 competitive meetings with Denmark.

Tiago is available for selection again after serving a one-game ban last time out, while Joao Moutinho and Fabio Coentrao are fit enough for the squad and Benfica's Nelson Semedo could make his senior debut.

Nani, Lars Jacobsen, Simon Kjaer and William Kvist will incur a suspension should they receive a booking in the match.