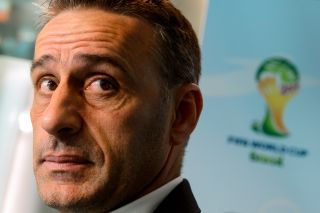 Bento's team drew Sweden in Monday's draw for UEFA's World Cup play-offs after both Portugal and the Swedes finished second in their respective qualifying groups.

Portugal qualified for the 2010 World Cup in South Africa and the 2012 European Championships in Poland and Ukraine thanks to play-off triumphs over Bosnia and Herzegovina on both occasions but Bento does not believe that will make a big difference when they take on Sweden.

"Our target was to (have) already qualified, as it was not possible, we have to try now with these two games," Bento said.

"They (Sweden) have an organised team, a very strong team, which finished the group stages in second behind Germany.

"It's not just because we had to play the play-offs in the past that we will have advantage for these matches."

Bento also dismissed suggestions the two-legged play-off, which will be played on November 15 and 19, will come down to a head-to-head battle between Portugal's Cristiano Ronaldo and Zlatan Ibrahimovic of Sweden.

"I do not think this play-off will be just for two players," the 44-year-old coach said.

"There will be two big players, one from each team.

"I can see two tough matches. Will be very difficult for both teams and there will be a lot of competition between us."

Sweden's head coach Erik Hamren revealed he would break down the play-off into four 45 minute blocks and claimed his team would have to perform in each half in both matches to overcome Portugal.

"We can't play just one or two or three.

"We need four and then we have a chance to beat them and that's what we are working on.

"That's the challenge for us and Portugal too - to perform at the best and at the right time."