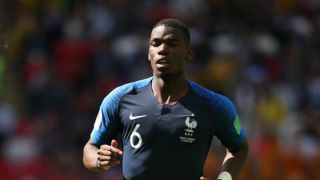 Paul Pogba is remaining positive and holds no bitterness towards the media, according to France team-mate Raphael Varane.

Pogba, 25, described himself as the "most criticised player in the world" earlier this week, days after playing a key role in France's goals in their 2-1 win over Australia in their World Cup opener.

But Varane said the Manchester United midfielder was still upbeat despite the critics.

"There's a lot of negativity in the press, that's the reality. We are always trying to be positive," he said.

"We look for what went well, and you like to talk more about what went wrong, so I think he was talking about that.

"But he's not bitter, he stays positive always. If you could be more positive, it would be cool."