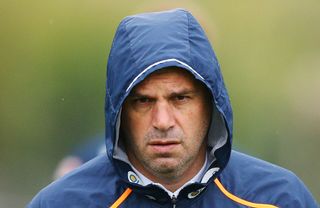 Kewell is set to line up against his old club at Etihad Stadium after signing on with Melbourne Heart for the 2013-14 campaign.

When asked on Friday what condition Postecoglou expects to find the veteran forward in when the teams clash, the Victory coach shot down the line of enquiry.

"I have zero interest in what other players from other clubs are doing. I'm interested in what our club's doing and what our players are doing."

Postecoglou said the Victory's lack of specific preparation for facing Kewell applied equally to all the big names they are set to encounter throughout the season.

"Tomorrow night will be about us and our performance and the way we play our football."

Heart won a feisty encounter 2-1 in the opening round of the season last year, and although Postecoglou is looking forward to another keenly-contested affair, he does not expect physicality to determine the outcome.

"These guys, not just my players but everyone around the league, they've been running around for four months itching to kick someone. I reckon they'll be a few (challenges) flying in in the first round.

With skipper Mark Milligan absent due to international duty, Postecoglou claimed he is yet to decide on a partner for stand-in captain Leigh Broxham in central midfield.

Rashid Mahazi, a recent signing from Northcote City, is in contention to make his competitive debut.

"Scotty Galloway got back late yesterday, he missed training but he can play in there.

"You can safely assume (James) Troisi, (Mitch) Nichols, (Pablo) Contreras will start. And Rashid's a chance."

Brazilian forward Guilherme Finkler, still seeking full fitness after returning from a torn anterior cruciate ligament, is expected to be named among the substitutes.