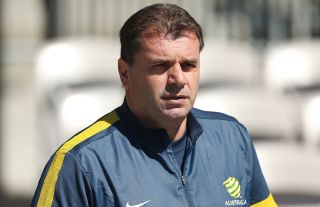 Rogic, 21, is one of the country's most exciting young talents, but found himself struggling to break into Celtic's first team after joining the Scottish Premier League giants last year.

The playmaker has now sealed a loan move to Melbourne Victory, where he is expected to feature heavily during the run in to the finals and throughout the AFC Champions League, should the club qualify for the tournament's group stage.

"It's pleasing that Tom will play some football," Postecoglou said.

"That was always what the priority was from my perspective, particularly in a World Cup year. That opportunity has been given, that's part one of the equation. Part two is now Tom's got to play some football, like everyone else.

"Melbourne Victory's a good club for him and more importantly I think the A-League will be a good test for him as a competition. Hopefully with Melbourne Victory getting past the first phase of ACL qualification, it gives him some real challenging games in the ACL."

Australia's hopes of a positive performance at the World Cup took hit this week with the news Robbie Kruse has torn his anterior cruciate ligament.

The Bayer Leverkusen forward had stated his intention of trying to recover in time to play in Brazil, but Postecoglou has effectively quashed the 25-year-old's chances of a comeback.

"I had a brief chat with Robbie the other day, obviously he's pretty devastated with what happened," he said.

"Realistically the World Cup will probably come too soon for him."

When asked who he had in mind to replace Kruse, Postecoglou said: "Way too premature for that.

"From my perspective it's all about trying to finalise a list of players we're going to take to the World Cup. Robbie was a very important part of what we did.

"Robbie and Mile Jedinak were the ones who were playing at the highest level, so to lose one of those two is a blow. But the opportunity is there now for somebody else to step in."

Postecoglou is set to spend the next two to three weeks scouting players in the UK, Europe and Asia, starting with trips to watch the likes of Massimo Luongo, Bailey Wright, Shane Lowry and Jackson Irvine.

However, the former Brisbane Roar and Victory boss made it clear once again that he will not offer any special treatment to certain players, revealing that he is yet to speak to banned midfielder Mark Bresciano since the friendly against Costa Rica in November, and will not be meeting with club-less skipper Lucas Neill, currently training with former side Blackburn, during his time in England.

One player who is of special interest is promising Liverpool defender Brad Smith. Available to play for both Australia and adopted country England, Postecoglou said the Socceroos are monitoring the teenager's situation and are keen to secure his allegiance.