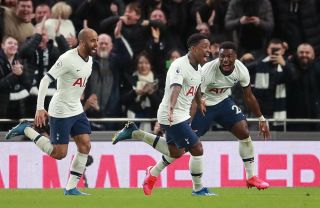 Tottenham face a striker crisis following the news that Son Heung-min will be out for several weeks after he fractured his right arm in Sunday’s win against Aston Villa.

Here, the PA news agency takes a look at some of the options available to the Spurs boss in the absence of his two main goal threats.

Moura and recent signing Bergwijn could form a forward pairing in a 5-3-2 formation. Their pace and mobility running in behind opposition defences would cause teams problems. Bergwijn scored 14 goals for Ajax last season while Moura showed he is capable in front of goal with 15 strikes last season, including two hat-tricks – most famously in the Champions League semi-final against Ajax. The problem with the formation is that if Mourinho sees his team being dominated in midfield and wants to go long, Moura and Bergwijn are not going to win many aerial battles.

Dele Alli as a number nine

Alli is good in the air and has the physical attributes to hold off defenders, together with the skill and intelligence to find space between the lines and beyond the last line of defence. Dropping deep would also allow Moura and Bergwijn to run beyond him, which plays to both of their strengths. The issue here might be shape. If Alli spearheaded the attack in a 4-2-3-1 line up with Moura, Bergwijn and probably Erik Lamela behind him, it would require the attacking midfielders to do a lot of work tracking back when Spurs are defending – leaving Alli isolated.

Mourinho tried it at Watford a month ago, with a midfield trio of Harry Winks, Alli and Giovani Lo Celso assisting a front three of Lamela, Son and Moura. Although Spurs did not find the net that afternoon, the game finished goalless, they created several chances to score. The addition of Bergwijn might see this tactic used again. Though known mostly as a winger, the January signing often found himself as the most advanced forward at his previous club PSV Eindhoven.

The news on Son, combined with Kane’s absence, might have provided a window of opportunity for academy graduate Parrott. However, at his pre-match press conference on Tuesday afternoon ahead of Spurs’ Champions League tie against RB Leipzig Mourinho said: “My thoughts are that Troy Parrott is not ready,” having said last month that the 18-year-old was “not ready at all” to fill the void as the main striker. The Republic of Ireland Under-21 international made his senior debut in the Carabao Cup defeat at Colchester in September before making his Premier League bow against Burnley in December.