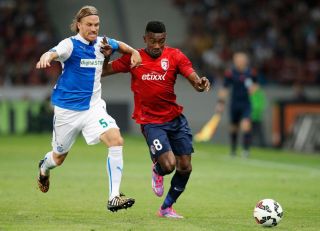 Poyet is desperate to add attacking reinforcements to his squad before the transfer window shuts on September 1 and while they have agreed a fee for Liverpool frontman Fabio Borini, though the Italian is reportedly reluctant to make a permanent switch to the Stadium of Light.

Borini's refusal to commit to a deal thus far has led to Poyet weighing up alternative transfer targets, with former Chelsea forward Kalou the latest to be linked.

Reports suggest the 29-year-old Ivory Coast international held talks with the Premier League club, but Poyet was in no mood to discuss transfer dealings to the press following Sunderland's 1-1 draw at home to Manchester United on Sunday.

"I am going to have to do research at this football club into who is leaking information every week. It cannot be always the player's agent," the Uruguayan boss said.

"A few agents, OK, you can blame them, but there is too much information coming out and I don’t like it.

"I am not going to comment on any players, sorry."