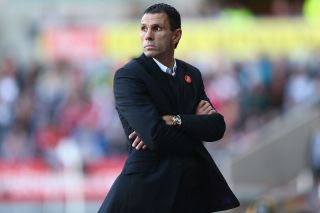 The Uruguayan replaced former incumbent Paolo Di Canio at the Stadium of Light earlier this month, after the Italian paid the price for taking just one point from five top-flight fixtures.

But Poyet's tenure did not get off to the ideal start as his charges were humbled 4-0 by Swansea City in his opening game in charge.

Sunderland are yet to win in the Premier League this term and have now taken just a solitary point from their eight fixtures.

And ahead of Sunday's derby with Newcastle United, Poyet told his players there is no room for individuals in his team.

"Sometimes, people say in football that you need to pick your 11 best individuals," he told the Sunderland Echo.

"We need characters, rather than individuals. We need players who react the right way and who are mentally strong.

"That is more important than playing your 'best' player, or the player that everybody likes.

"In my opinion, if you are to do well then you need everybody to have a clear idea of how you want to play and to understand the system.

"If two or three don't do that, it is difficult. And if those two or three are in key positions, then you have a big problem."

Poyet has only been in the job for just over two weeks, and readily admits he has yet to decide on his strongest line-up.

"It is clear that, over the eight games so far this season, the 11 players on the pitch week in, week out, haven't clicked yet, for whatever reason," he continued.

"The day I can tell you my team from one to 11 without any doubts, we will be in a good situation.

"Now, I have an idea of seven or eight, but there are still some places open."