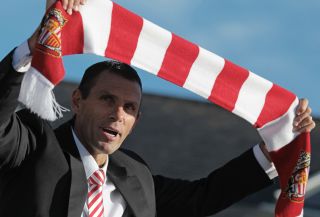 The Uruguayan was confirmed as Paolo Di Canio's successor at the Stadium of Light on Tuesday after the Italian paid the price for Sunderland's disastrous start to the Premier League season.

With his side sitting bottom of the Premier League, having accrued just one point from their opening seven games, Poyet's first assignment is a trip to Swansea City after the international break before his side host Newcastle the following week.

As a player, Poyet scored four goals in 11 games against the Tyneside club - Sunderland are coincidentally one of just two clubs he managed more against - and the former midfielder is hoping to heap more misery on Newcastle when they meet on October 27.

"My life in England and my football career as a player and manager has been linked with Sunderland and Newcastle," Poyet told The Shields Gazette.

"A little bit more with Newcastle to be honest because somehow - I don't know why - I always seemed to score against them.

"I always try to do the best for the club that I'm in. I support the club I'm working for, and become a fan, and I think that will show with the passion and what the players show as well.

"Let's hope it's a good one and we can beat Newcastle in a couple of weeks."

In each of the past two seasons, Poyet has enjoyed victories over Newcastle in the FA Cup with former club Brighton and Hove Albion - eliminating them in the fourth round in 2011-12 and the third stage last term.