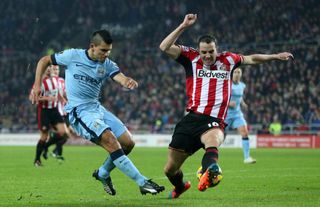 Sunderland had beaten champions City 1-0 in each of their previous four top-flight encounters at the Stadium of Light and threatened another upset on home turf when Connor Wickham opened the scoring in fortuitous circumstances in the 19th minute.

However, Manuel Pellegrini's men quickly turned on the style and the majestic Aguero equalised with a superb solo goal before rounding off the comeback with a cool finish in the 71st minute after Stevan Jovetic and Pablo Zabaleta had also scored.

"We started the game very well but we gave too many options to City to attack," head coach Poyet told BBC Sport.

"We didn't have the time to improve technically after taking the lead because they equalised so soon with a superb goal. When you have players like Aguero, they can do something from nothing."

"It was very difficult especially after the effort on Saturday," he added on the club's official website. "I decided not to change too many players and we started well in the first 20 minutes of the game, but it was tough and they were better than us.

"Sometimes you cannot complain too much - they were quicker and they were better technically.

"City have this but we need to be realistic and we cannot always be at the same level as the top teams, so it is a disappointing result but we need to accept it."