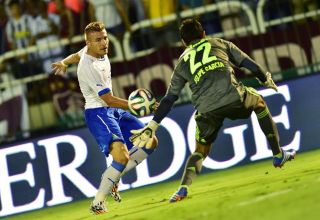 Immobile bagged a hat-trick, while Insigne scored twice as a second-string Italy overcame Fluminense on Sunday - their final warm-up match before the FIFA World Cup in Brazil.

Italy and Fluminense offered up an entertaining match at the Estadio General Silvio Raulino de Oliveira, with Napoli's Insigne and Borussia Dortmund-bound Immobile on the scoresheet during the opening half.

Immobile and Insigne added another three between them following the break to secure the win and Prandelli was pleased with what he saw, especially after the likes of Andrea Pirlo, Daniele de Rossi, Claudio Marchisio, Mario Balotelli and Mattia de Sciglio started on the bench.

"This evening we saw some interesting things," Prandelli told Rai Sport post-game after Italy ended their run of back-to-back draws against the Republic of Ireland and Luxembourg.

"Insigne and Immobile did well. We need to have more courage, but our condition is good."

Next up for Italy is their World Cup opener against Group D rivals England in Manaus on June 15.

"This is our final day of intense work. We will do some specific work this week and we will go into the match against England ready," Prandelli said.

The Milan player has not scored for Italy since equalising against Armenia in a World Cup qualifier in October last year.

"Balotelli? Goals need to be searched for, as Insigne and Immobile did," he said.

Italy will also come up against Uruguay and Costa Rica in Group D.