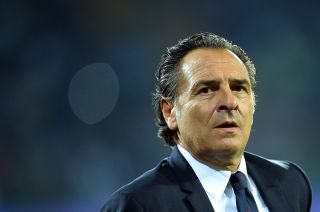 In their final FIFA World Cup qualifier, the hosts fell behind to a Yura Movsisyan goal after giving the ball away on the edge of their own area, before Alessandro Florenzi equalised midway through the first half.

Henrikh Mkhitaryan put Armenia ahead for a second time on 70 minutes, but substitute Mario Balotelli made it 2-2 six minutes later to preserve Italy's unbeaten record in Group B and ensure the side finish top on 22 points, having last month sealed qualification for next year's finals in Brazil.

Prandelli hailed the performance of his team despite being unhappy with how they had begun.

"We started really badly with an embarrassing opening 20 minutes," he said.

"We started raising the tempo and from there played quite well.

"Unfortunately we conceded (the second) from a corner that we gifted and were about to compromise everything."

Despite the errors, Prandelli insisted there were positives to be taken from the result.

"I saw players who never gave up and that was a positive sign," he said.

"I told the lads they had to play good football and now the World Cup campaign begins.

"We qualified for the Euros and World Cup without defeat. Clearly these last games make you think it won't take much to win, but the truth is you need great concentration and grit.

"I am not worried about whether we are top seeds (at the World Cup).

"The important thing was to qualify, we did that, and now we have to judge the performances to make the right choices for our final 23-man squad."

After scoring his first international goal, Florenzi was quick to praise the work of team-mate Lorenzo Insigne, who provided the assist with a delightful cross from the left.

"He saw my movement and put the ball on my head."

The Roma midfielder went on to admit that the game had not gone as expected.

"We didn't start the way we planned and unfortunately conceded that early goal," he said.

"But we did well to get the game back on track straight away. I think the 2-2 result does not reflect the match.

"The fans played their part and we tried to give them the performance they wanted. Unfortunately we didn't and we are disappointed."