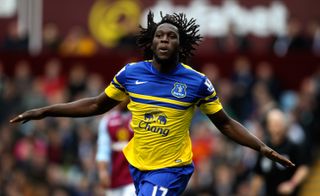 Villa manager Paul Lambert admitted during the week that he tried to sign Lukaku last season and the Belgian star netted his fifth league goal of the season as he swept home Leon Osman's pass from the edge of the box in the 68th minute.

The home side almost got off to an excellent start as Christian Benteke was tripped by Seamus Coleman in the area, but Tim Howard was down quickly to his right to tip his eighth-minute penalty over.

Substitute Osman secured the three points for Roberto Martinez’s Everton in the final 10 minutes as he slid a left-footed shot past Guzan following Gareth Barry’s cut-back to the 18-yard line.

Lambert was able to welcome Benteke back after a month out with a thigh injury, while Osman was replaced by Steven Pienaar in Everton's only change.

Villa looked the livelier side in the early stages and should have broken the deadlock when Benteke won himself a penalty, only for Howard to deny him.

Howard frustrated Benteke once more in the 23rd minute as the striker was played through on goal, but after coming in from the left saw the United States international palm his controlled effort away as chances started to become more commonplace.

Everton ended an entertaining first half on top as Barkley saw his long-range effort crash off the crossbar, before Kevin Mirallas weaved his way into the 18-yard box and poked wide.

Seven minutes into the second half, Barkley tried his luck from range again, but this time he missed the target altogether as his effort flew wide.

Fabian Delph was also trying to leave his mark on the match and his side-footed shot from the edge of the area looked goal-bound, but Phil Jagielka made a crucial block with his shoulder.

Everton eventually took the lead with 22 minutes left when Lukaku hit a low shot past Guzan 17 yards from goal.

Everton’s second away win from 13 matches was completed in the 81st minute as Osman hit a low shot past Guzan, leaving Villa just outside the relegation zone.