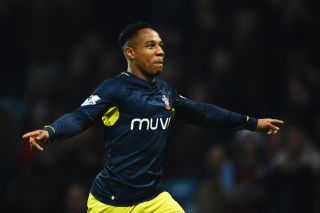 Nathaniel Clyne, fresh from making his England debut in the recent international break, scored his third goal of the season nine minutes from time to secure a share of the spoils.

Villa spent much of the first half under the cosh, but went ahead against the run of play thanks to the persistence of Gabby Agbonlahor, who capitalised on Fraser Forster's error.

The goal was the first that Southampton had conceded in over seven hours of Premier League football, but they struggled to break down a resolute home backline.

Having snapped a run of six straight defeats with a 0-0 draw at West Ham before the international break, Villa fans grew hopeful of just a second home win of the season as the game entered its final 10 minutes.

But Clyne latched onto a Ryan Bertrand pull-back to rifle home and deny Lambert a win as he hit a century of games as Villa Park boss.

Jores Okore made his first Villa appearance since September 2013 after a serious knee injury as part of three changes to Villa's back four, which was quickly put under siege by the visitors.

Southampton came into the game as one of the league's form side after five straight wins and went close three times in the opening 10 minutes as they looked to impose themselves on the contest.

The makeshift Villa defence stood firm, however, not allowing Southampton anything clear-cut, while Agbonlahor looked a menace on the counter-attack despite a lack of support.

And the Villa captain duly managed to break the deadlock all by himself on the half-hour.

A heave out of the Villa defence should have been easily dealt with, but Toby Alderweireld left the ball for an indecisive Forster, allowing Agbonlahor to nip in and round the England goalkeeper before slotting into the net.

Sadio Mane drew a flying save out of Brad Guzan as Southampton were unable to even the scores before the interval and Ronald Koeman began the second half with Dusan Tadic closer to Graziano Pelle in an attempt to penetrate Villa's stubborn defence.

It did little to boost the visitors initially and they could not find a way into the heart of the Villa defence despite dominating possession.

Indeed, Villa should have doubled their advantage in the 78th minute. Andreas Weimann led a swift counter-attack that resulted in Agbonlahor squaring for the Austrian 12 yards out, but he launched his shot into the Holte End.

And he was made to pay just three minutes later, England defender Clyne providing perhaps an unlikely source of inspiration as his scorching effort gave Guzan no chance.

The point only moves Villa up to 16th, but draws against two of the league's in-form sides will boost confidence, while Southampton's failure to win leaves Chelsea a dominant six points clear at the top.