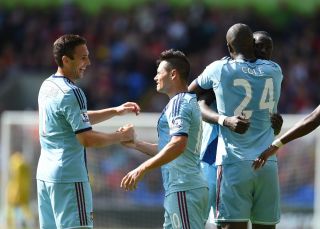 The impressive Zarate was brought into the starting line-up in the absence of injured captain Kevin Nolan and made the most of his opportunity by firing Sam Allardyce's side in front with a sublime volley in an eye-catching display.

Stewart Downing then produced another fine finish two minutes later to put the visitors in command at half-time in Saturday's London derby and Carlton Cole made sure with a third goal after Marouane Chamakh had given Palace hope by pulling a goal back against one of his former clubs.

Defeat for Palace was yet another setback in a turbulent week that saw them fail to appoint Tony Pulis' successor as manager, with Malky Mackay dropping out of contention after allegations were made of inappropriate text messages exchanged between him and Iain Moody during their time at Cardiff City.

Moody subsequently resigned from his role as sporting director at Palace and the club's hierarchy will need to act fast on the evidence of this display, which saw West Ham secure their first top-flight win of the season and leave the hosts without a point.

Palace suffered another blow when they lost Joe Ledley to injury in the warm-up, with Stuart O’Keefe replacing him, but they created the first attack of note when Martin Kelly surged into the penalty area and fired over a cross which drew a fine defensive header from Joey O'Brien to thwart the home side.

Zarate was fortunate to escape punishment for a late challenge on O'Keefe and the Argentine playmaker was then involved in a move which ended with Aaron Cresswell's tame shot being deflected for a corner.

The former Lazio man was causing Palace problems in behind Cole and put the visitors in front with a moment of class 34 minutes in.

Stand-in skipper Mark Noble's shot was blocked and the ball looped into the path of Zarate, who beat Julian Speroni with a stunning right-footed volley from 20 yards out.

Things went from bad to worse for Palace two minutes later when Downing picked up the ball wide on the right and cut in unchallenged before bending a measured finish into the far corner from just outside the penalty area to stun the home supporters.

Tomkins should have added a third goal when he rose to meet Downing's corner and headed against the crossbar just after the break.

And West Ham nerves were sent jangling when Chamakh found space 20 yards from goal before driving a right-footed strike just inside Adrian's right post to give Palace a lifeline.

The home side looked vulnerable at the back, though, and were made to pay for some dreadful defending after 62 minutes as they failed to deal with a free-kick looped into the penalty area and Cole was on hand to finish clinically.

Adrian denied substitute Glenn Murray in stoppage time after some great footwork in the box, but West Ham comfortably saw out a deserved victory to heap more gloom on Selhurst Park.