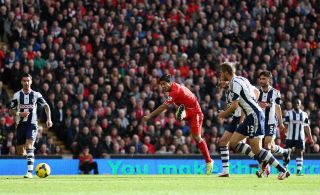 Steve Clarke’s team were chasing a fourth consecutive Premier League win over Liverpool but a virtuoso display from Suarez ensured that was never on the cards.

A solo effort and a stunning 18-yard header gave the hosts a 2-0 lead at the break and Suarez’s treble was complete when he converted Steven Gerrard’s 55th-minute free-kick.

Both teams made a solitary change from last weekend's action – Victor Moses dropping to the bench to accommodate Lucas Leiva in the Liverpool line-up, while West Brom forward Saido Berahino suffered a similar fate as Nicolas Anelka started against his former club.

Suarez was at the heart of the action from the off, scuffing wide from 20 yards in the seventh minute before tangling with West Brom defender Gareth McAuley and tumbling in the area.

Referee Jon Moss was not interested in the penalty claims, leaving the Uruguay international to take matters into his own hands with a brilliant 12th-minute opener.

It was 2-0 five minutes later when Suarez worked the ball left to wing-back Aly Cissokho and continued his run to plant a remarkable header into the top corner from the 18-yard line.

Martin Skrtel should have made it three before the half hour, missing his kick with the goal gaping on the back of a cleverly worked set-piece involving Suarez and Gerrard.

Morgan Amalfitano limped off to be replaced by Morrison and apparently complete West Brom's first-half misery but Skrtel was required to make a goal-saving tackle in stoppage time when Anelka rounded Simon Mignolet from Olsson's raking ball forward.

West Brom continued to give away free-kicks in dangerous areas, Yacob the main perpetrator, and, after Sturridge fizzed a viciously swerving effort wide, Suarez completed his treble.

Yacob finally earned a booking for fouling Sturridge on the left flank and Gerrard produced a sumptuous delivery for Suarez to leap and glance into the far top corner.

Liverpool's attacks were unrelenting – Sturridge blazing over from Glen Johnson’s 58th-minute cross before driving at the beleaguered West Brom backline and planting a side-footed effort against the crossbar.

The visitors were handed an unlikely route back into the match in the 66th minute, Morrison crashing home a penalty after Cissokho caught full-back Billy Jones on a burst into the box.

Liverpool started to appear ragged but Sturridge calmed Anfield in the most emphatic manner and there was still time for Myhill to touch a Suarez overhead kick onto the bar.