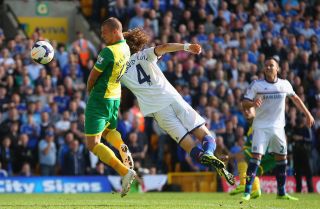 The London club's chances of taking their first away league win of Jose Mourinho's second spell at Stamford Bridge looked to be slim going into the closing stages after Anthony Pilkington had cancelled out Oscar's early opener.

But Norwich goalkeeper John Ruddy failed to keep out a tame Eden Hazard effort with time ticking down before Willian wrapped up the points with a stunning effort four minutes from time.

Chris Hughton made just one change to his team, as Sebastien Bassong returned from a hamstring injury to take his place at the back. And with Fernando Torres suffering with a knee injury – although he would have served a one-match suspension anyway following his red card against Tottenham - Demba Ba was handed just his second start of the season for the visitors.

Ba and Bassong were in fact involved in one of the match's early flashpoints, as the Chelsea striker went down under a questionable challenge from the Norwich captain in the box. The referee's refusal to award a penalty mattered little in the end, though, as Ba again played a key role in the visitors taking the lead a few moments later.

The Senegalese forward escaped the attentions of his marker to latch onto the ball in the area and produced a well-weighted lay-off which Oscar thrashed into the corner.

Ba then almost instantly doubled that lead, forcing an excellent save from Ruddy with a side-footed effort from a tight angle. But Norwich carved out a presentable chance of their own in reply, with Petr Cech somehow keeping out Jonny Howson's attempt to pass the ball home from close range.

Norwich also had the best chance before the end of the first half, but Howson could not engineer a shooting opportunity after Ricky van Wolfswinkel had headed the ball on into a dangerous area.

Chelsea had been largely comfortable since taking their early lead, but they were given a scare just a few moments after the restart following an incident that set the tone for the second period. Ramires' challenge on the breaking Pilkington had the home fans appealing for a penalty but, yet again, referee Neil Swarbrick showed little interest.

Van Wolfswinkel then almost got himself on the scoresheet but he could only chest a bouncing ball into the box wide with Cech stranded. However, Norwich did get the goal their endeavour deserved on the hour mark.

Martin Olsson's cross from the left found the head of the lively Van Wolfswinkel, and Pilkington succeeded where his Dutch team-mate had previously failed by guiding the ball into the back of the net  - although unconventionally via his face.

Both managers made attacking substitutions in a bid to claim the win late on, but it was two of Chelsea's new additions who provided the decisive impact.

When Alexander Tettey's failed attempted clearance fell into his path, Hazard still had plenty to do - and his shot looked destined for the safety of Ruddy's arms. However, the Englishman did little to bolster his case to replace Joe Hart between the sticks for his country, despite his inclusion in Roy Hodgson's latest squad, as the ball squirmed under his body.

But there was no sense of good fortune when Willian made certain just a minute later, the Brazilian curling the ball brilliantly home from the edge of the area to grab his first goal for his new club.