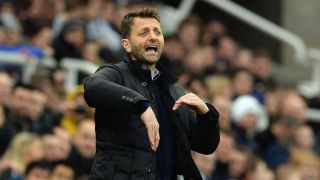 Sherwood replaced Paul Lambert at Villa Park in mid-February, but oversaw a 2-1 loss against Stoke City before his side were beaten 1-0 at Newcastle United on Saturday.

The loss at St James' Park left Villa 19th in the table, without a league win in 12 matches and with only 13 top-flight goals all season.

"They are a good group. They really care. They really want to be in the Premier League," said Sherwood of his squad.

"I was encouraged [against Newcastle]. I see an improvement which means they're listening on the training field and they're trying to apply themselves correctly.

"I'd take a poor performance on Tuesday and three points please. Two wins this week. Two wins and we bounce into the next game.

"We need a shot of confidence here."

While Villa have yet to pick up a point following Sherwood's arrival, things could not be more different at Albion, who have flourished since Tony Pulis took charge.

West Brom have only lost once in all competitions under the Welshman, winning six matches out of 11 since his appointment was announced.

That form has seen Pulis secure 13 league points and move Albion eight clear of the danger zone, boosting confidence around the club ahead of their trip to Villa.

"We will be looking to go to Villa Park on Tuesday night and see if we can extend the unbeaten run we have been on," said midfielder Chris Brunt.

"Villa are having a tough time at the minute - they haven't scored many goals.

"But that's got to come to an end sometime. It's up to us to go there on Tuesday night and make sure it's not against us.

"It's going to be an exciting week for people in the Midlands."

Southampton were the latest team to fall victim to Pulis' revolution, Saido Berahino scoring a stunning early winner at the weekend.

However, Berahino hobbled off in that match having not trained properly in the week building up to it, with strike partner Brown Ideye also withdrawn through injury.

Sherwood will give Kieran Richardson and Aly Cissokho as long as possible to prove their fitness after they missed the Newcastle game, while captain Ron Vlaar returns from suspension.