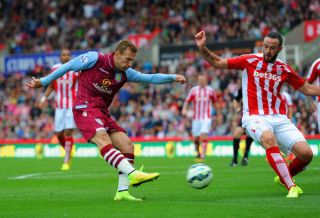 Villa, who kicked off last season with a 3-1 win at Arsenal, had to defend well in the early stages, but looked increasingly threatening as the match opened up.

And Weimann found the target five minutes into the second half, sweeping home a right-footed effort from inside the penalty area amid some questionable Stoke defending to secure all three points.

New Stoke signings Bojan Krkic and Mame Biram Diouf failed to inspire a fightback for the home side at the Britannia Stadium, with Villa goalkeeper Brad Guzan enjoying a relatively quiet second half.

Mark Hughes handed Premier League debuts to Bojan, Diouf and Phil Bardsley, while full-back Alan Hutton was brought in from the cold for Villa having previously been frozen out by manager Paul Lambert.

The Villa defence, which also featured new boy Philippe Senderos for the first time, came under pressure early on, with Steven N'Zonzi sending a tame effort into the arms of goalkeeper Guzan before Bojan drilled wide of the left post.

N'Zonzi and Bardsley both required treatment after being caught by strong challenges during the first half, as new Villa assistant manager Roy Keane – capable of a full-blooded tackle himself during his playing days – watched on from the dugout alongside Lambert.

Gabriel Agbonlahor should have done better when Stoke goalkeeper Asmir Begovic carelessly rushed to the edge of his penalty area, but diverted wide of the target after receiving the ball from debutant Kieran Richardson.

Bardsley saw a curling effort well saved by Guzan in the closing minutes of an open first half, before Stoke had to scramble the ball clear after Charles N'Zogbia had an effort blocked.

The home side were not so successful in clearing their lines five minutes into the second half, though, as the ball fell kindly to Weimann and he fired across Begovic into the back of the net to stun the home supporters.

The excitement proved too much for one fan, who made his way onto the pitch as Weimann celebrated his goal.

Bardsley and Weimann had a coming together in the Villa box on the hour-mark, but the Stoke defender's protestations for a penalty were ignored by referee Anthony Taylor.

Marko Arnautovic fired wide of the target as Stoke desperately went in search of an equaliser, before Villa substitute Leandro Bacuna wasted a chance to put the result beyond doubt when he ballooned an effort over in the closing stages.

However, Villa clung on to open their account for the new season with three points once again.