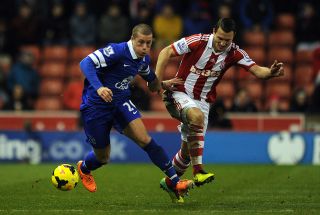 Oussama Assaidi netted four minutes into the second half after Kevin Mirallas had struck the woodwork twice for Roberto Martinez’s men in the opening period.

With the match seemingly heading for a Stoke victory, Jermaine Pennant's reckless lunge on Leon Osman in the box handed Everton a spot-kick, which Baines duly dispatched.

The draw is the third consecutive 1-1 between the sides at the Britannia Stadium.

Stoke welcomed Marc Wilson and Glenn Whelan back from suspension, while Everton made five alterations to the side that beat Southampton 2-1 on Sunday, including handing a first Premier League start to defender John Stones, who partnered Antolin Alcaraz in the heart of defence with Phil Jagielka and Sylvain Distin both injured.

With rain teeming down at the Britannia, Mirallas had the best chance of the opening period as the match reached the half-hour mark, rifling a shot against the underside of the crossbar from 20 yards with Sorensen well beaten.

Assaidi, who has a couple of memorable strikes to his name this season, almost broke the deadlock in the scrappiest of fashion 11 minutes before the break as he saw a shot from inside the area deflected just wide by Alcaraz.

Ross Barkley then guided the ball just over from a Mirallas cut-back six minutes later, before the Belgian attacker struck the frame of the goal for a second time from a free-kick as the sides went in at half-time all square.

Stoke, who are already without the injured Asmir Begovic, suffered a further goalkeeping blow at half-time, with Thomas Sorensen failing to re-emerge for the second half due to a reported Achilles problem – Jack Butland coming on in his place to make his Premier League bow.

But those worries were soon forgotten when Assaidi – on loan from Everton’s Merseyside rivals Liverpool - drilled home from the edge of the penalty area following a failed headed clearance by Stones.

Charlie Adam turned well on the edge of the penalty area to fire a left-footed effort straight at Tim Howard seven minutes later, as Stoke assumed control of the fixture.

But Everton started to look dangerous again, with Barkley and Mirallas both having efforts blocked in the penalty area.

It looked as though Stoke were going to do just about enough to seal the three points, but Pennant hacked down Osman in the penalty area in stoppage time to give the visitors hope.

Baines coolly slotted home from the spot to rescue a deserved point for Everton, who dropped into fifth behind rivals Liverpool.