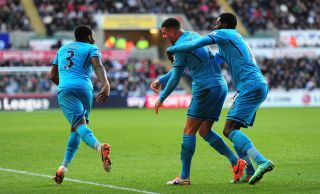 The last time Spurs won five league matches in a row on the road was in the 1960-61 campaign, when they completed the top-flight and FA Cup double.

Despite being on the back foot for much of the first half, the visitors went in front 11 minutes before the break thanks to Adebayor's header from Christian Eriksen's superb delivery.

Chico was the man at fault for Tottenham's second as his touch took Kyle Walker's cross past Gerhard Tremmel to put the game out of Swansea's reach eight minutes after the break.

There was time for Adebayor to complete his brace with a cool finish from inside the area and, despite Bony's strike, Sherwood maintained his unbeaten league record in charge of Spurs.

Michael Laudrup made one change from the Swansea side beaten by Manchester United last time out as Chico replaced Jose Canas.

Spurs also made one change from their last outing as Nacer Chadli came in for Roberto Soldado - the Spain international dropping to the bench.

Despite having won just twice at home in the Premier League this season, Swansea began brightly, with Jonjo Shelvey at the centre of things for the hosts early on.

He had Swansea's first effort on target after 13 minutes, shrugging off the attentions of Vlad Chiriches before forcing Hugo Lloris into a smart stop with a long-range drive.

Bony flashed a shot wide seven minutes later and the Ivorian then rattled the crossbar with a venomous strike from outside the penalty area.

Spurs' attack had looked out of sorts for much of the half but Adebayor found the net with their first effort of the game.

Eriksen's pinpoint cross was met by the former Arsenal striker, who registered his fifth goal in eight games from close range.

The goal sparked Spurs into life and Adebayor could have had a second six minutes before the break, only for Tremmel to keep out his vicious strike.

An own goal from Chico double Spurs' advantage early in the second half, with the Spaniard diverting Walker's cross into his own net after Roland Lamah had failed to track the right-back.

Adebayor scored his second 19 minutes from time, calmly rolling Danny Rose's ball past Tremmel, before Bony eventually got on the scoresheet with an expert volley after 78 minutes.

His 14th goal of the season made little difference to the scoreline, though, with Laudrup's men left three points above the relegation zone ahead of clashes with Fulham, West Ham and Cardiff City - all of whom occupy spots in the bottom four.