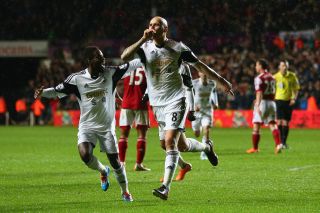 After hitting the crossbar in a goalless first half at the Liberty Stadium, Jonjo Shelvey broke the deadlock in the 61st minute with a shot that took two deflections on its way past Maarten Stekelenburg, with Nathan Dyer providing the assist.

And Chico Flores bounced back from reports of a training-ground bust-up to net his second goal of the season in the 75th minute, putting the result beyond doubt.

The win moves Swansea six points clear of the relegation zone, while Fulham remain perilously poised with just a one-point cushion above the bottom three.

Swansea made six changes from their 2-1 FA Cup fourth-round victory over Birmingham City on Saturday, with Shelvey and Jonathan de Guzman returning to ease the club's midfield injury crisis, while Dyer took his place on the bench after six weeks out with an ankle injury.

Having made 11 alterations for Fulham's cup draw at Sheffield United on Sunday, Rene Meulensteen repeated that move for the trip to south Wales, reverting to the team that started a 2-0 Premier League defeat at Arsenal on January 18.

After a quiet opening 10 minutes, it was Wilfried Bony who had the first chance of the match, heading narrowly over following a Wayne Routledge cross from the left.

The hosts were doing the majority of the pressing as the half progressed, but a lack of quality cost them dearly in the final third.

Brede Hangeland squandered an opportunity to put Fulham ahead in the 20th minute when he powered a header over from a Kieran Richardson free-kick, before Dejagah nodded straight at Gerhard Tremmel from an Alexander Kacaniklic cross.

Just as Fulham were beginning to look the more threatening, Shelvey rattled the crossbar with an effort from the edge of the penalty at the other end – the closest either side came in a goalless opening period.

Chico had Stekelenburg at full stretch with a headed effort from a corner shortly after the break, before De Guzman forced the Dutchman into another save with a powerful strike from distance.

Michael Laudrup introduced Dyer from the bench shortly before the hour, sparking an upturn in the Swansea performance.

And the home side were ahead minutes later - Dyer teeing up Shelvey for a thunderous effort from the edge of the penalty area that deflected off Steve Sidwell and Hangeland to wrongfoot Stekelenburg and nestle in the bottom right-hand corner of the net.

Swansea had the points in the bag in the 75th minute when Chico's glancing header from a De Guzman free-kick deflected in off Dimitar Berbatov.

Darren Bent saw an effort drift just wide of the target in the closing stages, but it was as dangerous as Fulham looked in the second half.