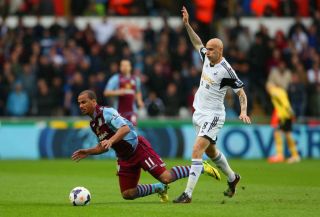 Paul Lambert's side came into the weekend four points above the drop zone in the Premier League, but saw that gap reduced following a defeat in which Shelvey provided a moment of pure quality at the Liberty Stadium.

The midfielder capitalised on a poor Ron Vlaar attempted clearance to find the back of the net from the edge of the centre circle to put Swansea back in front, as the hosts recorded their first back-to-back league wins since December 2012 and eased any lingering fears of relegation.

Pablo Hernandez then fired home from 12 yards in the 73rd minute and just as at Newcastle, Bony scored from the penalty spot in time added on after Nathan Baker had fouled Marvin Emnes.

The result lifts Swansea eight points clear of the relegation zone, while Villa boss Lambert may now be a little more concerned over his future, with speculation mounting that chairman Randy Lerner is looking to sell the club.

Bony scored both goals in Swansea’s victory at Newcastle United last Saturday and wasted no time in adding to his goal tally seven days on.

The Ivorian was the grateful recipient of a precise Shelvey through-ball 10 minutes in, and beat Brad Guzan with a clinical finish to put the hosts in front.

Marc Albrighton, whose future at Villa beyond the end of this season is yet to be resolved, was first to threaten the Swansea goal with a 20-yard effort that drifted wide of the left-hand post.

But the winger was the architect for team-mate Agbonlahor's leveller, with his cross from the right allowing the striker to tap home in the 22nd minute for his first goal in 12 games - and his second against Swansea this season.

The midfielder knocked the ball down from Vlaar's bad attempt to clear, before beating Guzan with an audacious long-range right-foot strike - a sure-fire goal-of-the-season contender.

Shelvey clearly had an eye for goal and forced Guzan into a diving save after the break, before Jonathan de Guzman poked just wide of the left-hand upright after being picked out by a Wayne Routledge pass.

Swansea then gave themselves some breathing space in the 73rd minute, when Shelvey found an unmarked Hernandez with a cross from the right - the Spaniard cutting inside and smashing home from 12 yards for his first goal since September.

And things went from bad to worse for Villa in stoppage time, as substitute Emnes was felled in the box by Baker and Bony coolly slotted home in a carbon copy of Swansea’s winning goal at St James' Park last weekend.