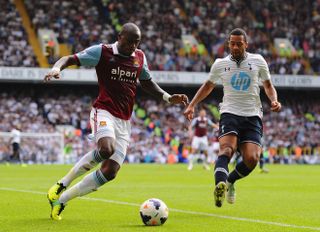 West Ham – who created the better chances throughout the contest – were rewarded for a disciplined performance with a second-half rampage that shocked the hosts.

Winston Reid started the hot streak, putting the visitors in front in the 66th minute when he converted a Stewart Downing corner, and Ricardo Vaz Te doubled the lead shortly after.

And the win was confirmed 11 minutes from time as Ravel Morrison scored a superb individual goal to cap off West Ham's first away triumph this season.

Tottenham manager Andre Villas-Boas made just one change, selecting Jermain Defoe in place of Roberto Soldado, while West Ham made three alterations, with Vaz Te and Downing among the inclusions.

It was the visitors who crafted the first chance of the game as Kevin Nolan headed wide from Downing's cross.

Sam Allardyce's side frustrated Tottenham in the early going, with the hosts struggling to create clear-cut opportunities despite dictating the majority of the play.

Indeed, it took over 30 minutes for Spurs to finally exploit an opening in the West Ham defence, but Paulinho could only volley wide after latching on to a delivery from Andros Townsend on the right.

Townsend was at the heart of almost every Tottenham attack, and it was his ball in that should have provided the opening goal, but Defoe failed to get the telling touch with the goal at his mercy.

West Ham arguably created the best chance of the first half in the dying stages as Nolan lashed a volley across the face of goal following a clever Mark Noble free-kick, as both sides went to the break goalless.

Tottenham made a rapid start to the second half, with Defoe denied twice by West Ham goalkeeper Jussi Jaaskelainen as they searched for the breakthrough.

West Ham came close to opening the scoring when James Tomkins' close-range header was clawed out by Tottenham goalkeeper Hugo Lloris, but they did get the opening goal just after the hour-mark thanks to Reid.

The New Zealand international slotted West Ham's first away goal of the season from close range after his initial header from Downing's corner was blocked by team-mate Nolan.

And more misery was to come for Tottenham, as Vaz Te doubled their advantage just six minutes later.

Noble set up the goal, sliding through a neat ball into the path of Vaz Te, and the Portuguese forward bundled home at the second attempt following a fine save from Lloris.

Villas-Boas threw Soldado into the fray in an attempt to turn the game around, but West Ham silenced the home crowd thanks to Morrison's goal.

The former Manchester United midfielder surged clear from inside his own half, beating Jan Vertonghen and Michael Dawson before lofting a composed finish into the back of the net.