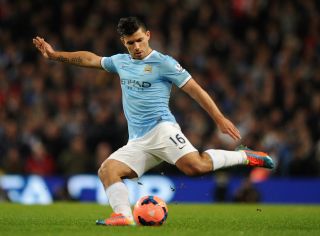 Aguero's neat finish after 15 minutes set City on their way during an impressive first half, which was dampened somewhat when the forward limped off.

But the visitors put the game to bed with a blistering second half.

Danny Rose was sent off after he was adjudged to have fouled Edin Dzeko and Yaya Toure slotted in the spot kick six minutes after the restart.

Dzeko then got in on the act himself from close range and though Etienne Capoue pulled on back for Tottenham, Stevan Jovetic's first league goal for City and Vincent Kompany's late effort confirmed their eighth successive league win and condemned Tottenham to their first Premier League defeat under Tim Sherwood.

Sherwood made one change from the victory at Swansea, with Gylfi Sigurdsson replacing Nacer Chadli.

Manuel Pellegrini made five alterations to his City side after the FA Cup scare against Watford, including recalls for captain Kompany and David Silva.

Aguero had scored six times in his previous four games following his injury lay-off and almost added another early on when he rattled the post from a tight angle.

City's early dominance was rewarded four minutes later, though, when Silva slipped in a perfect ball for Aguero and he delicately stroked his shot past the onrushing Hugo Lloris from 10 yards.

Emmanuel Adebayor's curling effort was deflected wide soon afterwards, but Spurs were indebted to Lloris after 20 minutes when he made a stunning one-handed save to keep out Aguero's pin-point header.

Michael Dawson thought he had brought Tottenham level after 36 minutes when he prodded in a fantastic Christian Eriksen free-kick, but he was ruled marginally offside.

There was controversy a few moments after half-time when Dzeko was played in on goal, only to be thwarted by Rose, and even though the Tottenham man appeared to win the ball, referee Andre Marriner awarded a penalty and sent the defender off.

Toure dispatched the penalty into the corner for his 15th goal of the season.

City ensured an 18th win from their last 20 games after 53 minutes when Silva's rasping drive was brilliantly tipped onto the post by Lloris, only for the ball to eventually fall to Dzeko, who slotted home with ease.

Tottenham did pull one back six minutes later when City failed to deal with a corner and Capoue latched onto the loose ball to hammer home from six yards.

But a perfect night was rounded off late on when Jovetic found space in the area to thump beyond Lloris via a deflection, and Kompany's late effort rounded off a five-star performance.