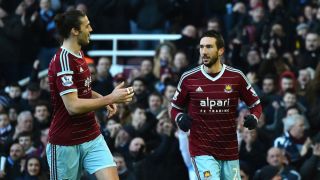 A superb second-half showing helped West Ham end a near month-long wait for a Premier League win in a 3-0 victory over Hull City at Upton Park.

Strugglers Hull, without six first-team regulars through injury, tried to capitalise on any nerves born from a winless league run for West Ham that had stretched to four matches before Sunday's contest and the Yorkshire side arguably edged the first half.

However, West Ham were much improved after the restart and in-form striker Andy Carroll tapped home his fifth Premier League goal of the season shortly after the break.

Substitute Morgan Amalfitano made it 2-0 with a clever dink and Stewart Downing added further gloss with a composed finish in the 72nd minute.

Sone Aluko was at the heart of a bright Hull start and the forward picked out a great pass from the byline to find Ahmed Elmohamady, who should have done better with a side-footed effort that went wide of the left-hand post in the sixth minute.

West Ham, who made just one change to the XI that drew 1-1 with Swansea City in their last Premier League match, grew into the game and James Tomkins headed over inside the six-yard box under pressure from Hull goalkeeper Allan McGregor.

At the other end, Aluko, who returned to the starting XI in one of three Hull changes from last weekend's 1-0 loss at West Brom, continued to torment the West Ham defence, but he was twice guilty of over playing when he had the chance to shoot.

The hosts finished the half strong. Enner Valencia looped a header onto the crossbar and, when Downing returned the ball into the area, McGregor was on hand to make a smart low save from Tomkins' header.

Hull were then dealt a blow in stoppage time when James Chester had to be replaced by Maynor Figueroa due to an apparent shoulder injury.

Steve Bruce had to make a further change with son Alex coming off for Harry Maguire, while West Ham were also forced into a substitution as Winston Reid replaced James Collins.

West Ham had more tempo to their play after the break and that resulted in the deadlock being broken in the 49th minute.

McGregor failed to parry Valencia's 20-yard shot to safety and Carroll was quickest to react to tap in the rebound.

Hull almost gifted West Ham a second when Michael Dawson's wayward pass was latched on by Valencia, who took a first poor touch before lashing his shot into the side-netting.

There was no let-off in the 69th minute, though, as Amalfitano - who had replaced Mark Noble three minutes earlier - collected Valencia's throughball and his delicate chip beat the outstretched McGregor.

Hull's misery was compounded three minutes later. Alex Song played a defence-splitting pass that sent Downing clear and the England international kept his composure to slot his shot into the bottom right-hand corner.

West Ham continued to turn the screw in the closing stages and Kevin Nolan almost added a fourth when his fierce shot from a tight angle crashed against the crossbar.