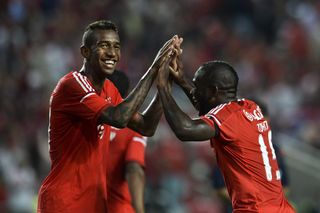 Jorge Jesus' Benfica struck four times in the final quarter-hour in a 4-0 victory over Arouca at the Estadio do Sport Lisboa e Benfica.

Talisca, Derley, Eduardo Salvio and Jonas netted for Benfica, who claimed their sixth win in seven league games this season.

The opener finally came in the 75th minute as Talisca burst through the middle before firing a 20-yard strike into the top corner.

Salvio set up the second with a run down the right before he squared for Derley to tap in from close range, albeit with the help of the underside of the crossbar.

A couple more followed for Benfica as Salvio headed in and Jonas sealed what ended up being a comprehensive result.

Porto ended a run of three consecutive draws in the league with a 2-1 victory at home to Sporting Braga.

Academica and Moreirense played out a 0-0 draw, bottom side Gil Vicente drew 1-1 with Estoril and sixth-placed Rio Ave were held to a 0-0 result at Nacional.

Belenenses came from behind to draw 1-1 at home to Vitoria Setubal.