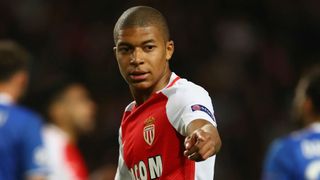 Prince Albert II dismissed the idea of Kylian Mbappe leaving Monaco, instead talking up the prospect of a new contract with the Ligue 1 champions.

Mbappe is hot property after scoring 26 goals in all competitions as Monaco dethroned Paris Saint-Germain in France and reached the Champions League semi-finals last season.

The 18-year-old forward has been linked with Spanish and European champions Real Madrid, as well as Arsenal, Manchester United and Barcelona.

"I don't think [that he will leave]," Prince Albert II told L'Equipe. "There are ongoing discussions that make me think he will be at Monaco nest season.

"The discussions relate to a possible wage hike. But I think that he has understand, his father too, that it is not yet in his interest to go to a huge club, where he is not assured playing time.

"Even if [Zinedine] Zidane has said that he would receive playing time at Real Madrid."

PSG are also keen to lure Mbappe to the French capital but when asked about their interest, Prince Albert II added: "No. It is my opinion and I think that it is also that of [Monaco vice-president] Vadim Vasilyev."