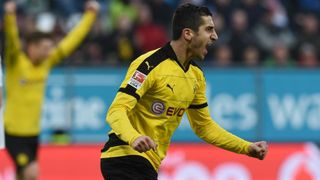 Jose Mourinho has backed Henrikh Mkhitaryan to make an immediate impact in the Premier League following his move to Manchester United.

United announced the signing of the Armenia international from Borussia Dortmund on Wednesday for a reported fee of £26.3million.

Mkhitaryan, who has agreed a four-year deal with the option for a further year, registered 23 goals and 26 assists in all competitions in a stunning campaign for Dortmund in 2015-16.

And Mourinho has no doubt he will be able to replicate that form in England's top flight.

"Henrikh is a very talented footballer who has been in such prolific form for both his club and his country," the United boss told the club's official website. "He is a real team player with great skill, vision and also has a good eye for goal.

"I am delighted he has chosen to sign for United. I believe he will make an impact on the team very quickly as his style of play is suited to the Premier League. We are all looking forward to working with him."

The 27-year-old is United's third signing under Mourinho, following the arrivals of Eric Bailly and Zlatan Ibrahimovic, and the former Chelsea boss feels he has added quality.

"The number of assists is also very clear - it shows his creativity, his vision, his concept of collective play. That is something that is really important for a club like us who will try to be dominant and who will face clubs with a very defensive profile.

"He has a change of speed with the ball and without the ball that is very important for a club like us."