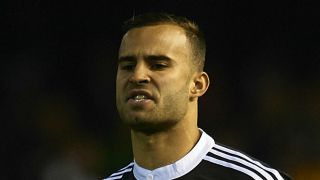 Paris Saint-Germain outcast Jese Rodriguez has spoken of his desire to turn his loan deal at Las Palmas into a full transfer.

Spanish forward Jese made the switch to Ligue 1 giants PSG in August after falling out of favour at the Santiago Bernabeu.

However, first-team opportunities remained at a premium at Parc des Princes with just one of Jese's nine league appearances coming as part of the starting line-up.

Jese was consequently shipped out on loan to Las Palmas in January and he has scored three goals in 15 LaLiga outings.

PSG coach Unai Emery stated that a decision has not been taken on Jese's future last week, but the 24-year-old has his heart set on staying in Spain.

"I am a PSG player and I have to go back to see what indications they will give me," he told Territorio UD.

"I might think one thing, PSG another and Miguel Angel Ramirez [Las Palmas president] has another idea too."