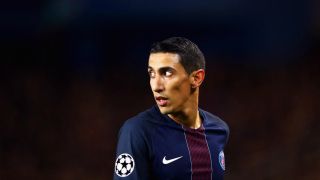 Authorities were also said to have visited the homes of Argentina internationals Angel Di Maria and Javier Pastore to collect information in relation to an ongoing investigation.

"Paris Saint-Germain communicated all the information and documents requested on two of its players," read a PSG statement quoted in the French media.

"Paris Saint-Germain emphasised that all of the relative contractual documents of these two players have been concluded in perfectly regular conditions, as the club has demonstrated systematically and with the utmost rigor.

"The club will continue to answer, in perfect transparency, any new request from the competent authorities."

Training session at the Parc des Princes four days before Saturday's final !May 23, 2017

A statement released via Cavani's agent on Tuesday said: "Mr Edinson Cavani again denies, with the utmost firmness, the unfounded accusations against him."