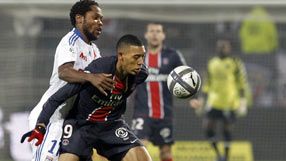 The visitors were on course for victory when Guillaume Hoarau converted a penalty to give them a 2-1 lead in the 82nd minute.

But with three minutes remaining PSG keeper Apoula Edel fluffed a clearance and the ball fell to Bafetimbi Gomis, who swept home to rescue a point for Lyon.

"I am disgusted but that is football," PSG playmaker Nene told Canal Plus. "We have to keep working, it is the only way. But it is difficult to lose two points like that."

Aly Cissokho had opened the scoring for the hosts in the 53rd minute, before Nene headed PSG level 10 minutes later.

Lyon's Cissoko was then sent off after conceding the late penalty that PSG thought had won it for them.

The draw lifts PSG into third place on 24 points, one point shy of leaders Olympique Marseille, who had gone top with a 4-0 thrashing of fellow title contenders Montpellier on Saturday.

Lyon climbed to seventh on 23 points, while Lille slipped to second on goal difference after being held to a 1-1 draw at Bordeaux on Saturday.

Earlier on Sunday, Auxerre's five-match unbeaten run in Ligue 1 ended when they lost 2-1 at home to Toulouse.

Daniel Braaten scored after eight minutes and Federico Santander added another 11 minutes before half-time to put the visitors two up.

Auxerre looked more dangerous after the break and pulled one back through Alain Traore in the 56th minute, but Toulouse held on to secure their first victory at the Abbe-Deschamps stadium in 20 years.

The game between Stade Brest and RC Lens was abandoned at half-time because of heavy snow, and has been rescheduled for Tuesday.