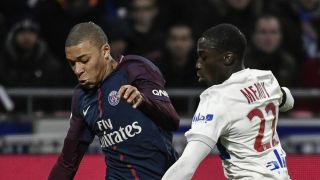 Paris Saint-Germain striker Kylian Mbappe left the field on a stretcher after an accidental clash with Lyon goalkeeper Anthony Lopes.

Marco Verratti's raking pass sent the France international through on Lopes' goal in the first half of a top-of-the-table clash in Ligue 1 on Sunday.

But Lopes got to the ball a split-second before Mbappe, subsequently crashing into the 19-year-old, who had already required treatment for a head wound. Mbappe had to be replaced by Julian Draxler following a lengthy delay.

PSG trailed 1-0 to a sensational Nabil Fekir free-kick scored in the second minute of the game, with Lyon seeking to cut the league leaders' 11-point cushion.

Unai Emery was already without Brazilian superstar Neymar, who missed the trip to Lyon as a result of a thigh injury.