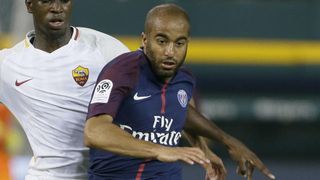 Brazil international Lucas Moura has joined Tottenham from Paris Saint-Germain in a deal thought to be worth £25million, the Premier League club have confirmed.

Lucas became PSG's record signing when he arrived from Sao Paulo in January 2013 for €45m (£38m), but fell out of favour under Unai Emery and has now signed for Spurs until 2023.

Speaking to Spurs TV, he said: "It's a new chapter of my life, a new challenge for me.

"I can play in the Champions League, it's a big objective for me. Everything is perfect and I'm sure that we will do big things together.

"We can win a lot of things and why not the Champions League?"

Despite scoring 12 goals in 37 top-flight appearances as PSG finished second in 2016-17, Lucas found himself on the fringes of head coach Emery's squad this season, scoring once in just six outings in all competitions.

Lucas has yet to appear in this season's Champions League, meaning he could feature when Mauricio Pochettino's men take on Juventus in the last 16.

The London club, who host Manchester United on Wednesday, are on the periphery of the top four and were held 1-1 by Newport County in the FA Cup at the weekend.

Lucas, who won an Olympic silver medal in 2012, has 36 international caps to his name and joins former PSG team-mate Serge Aurier at Wembley.