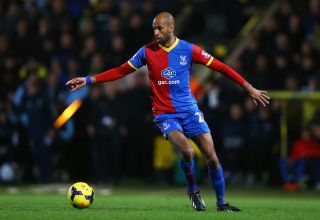 Palace co-chairman Steve Parish had stated Kebe would not move to the Yorkshire club on Wednesday and insisted no decision had been made on the 29-year-old's immediate future.

However, Pulis has now revealed the Mali international is set for a temporary switch to Elland Road and a reunion with Brian McDermott, who he worked with at former club Reading.

"Kebe is on his way to Leeds as we talk," he said ahead of Palace's visit to Tottenham on Saturday in the Premier League.

"Then you've got JT (Jerome Thomas) coming back."

While Kebe is seemingly heading for the Selhurst Park exit door, Pulis refused to be drawn on incomings, with Blackburn Rovers centre-back Scott Dann touted as a possible signing.

He added: "I've been linked with 40 players - you get linked all the time. This is the window.

"If we do our business I'm sure once it's done you can ask me about it. The important thing at this football club is to bring players in that have got something to prove - I don't want to be bringing players in if I can help it that just turn up and want to jog through six months.

"I want people who really roll their sleeves up, work hard and add to what we've got already. I've got a list of players and the chairman has got the list of players.

"We need to do it. We need to get deals done if we're going to push on - that's always been my thoughts, even before I came into the football club."