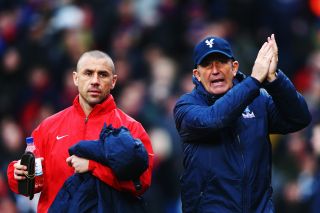 Goals from ex-Cardiff forward Cameron Jerome and Marouane Chamakh secured Palace's first back-to-back Premier League wins since 2004 and only West Ham's superior goal difference – which took a hammering after a 4-1 defeat to Liverpool – keeps Pulis' men in the relegation zone.

Three victories in four outings is a far cry from the seven-game winless streak during which Pulis' predecessor Ian Holloway lost his job.

And Pulis underlined the importance of taking points off teams near the foot of the table with games against Chelsea, Newcastle United and Manchester City on the agenda before the end of the month.

"These are important games," said Pulis, who also oversaw Tuesday's 1-0 win over West Ham at Selhurst Park. "It's going to be a massive task for us and everybody understands that.

"It's always very difficult for team who get promoted to stay in it the first year because it's such a relentless league.

"But we needed to get points this week. It was very important because we have some very, very tough games coming up, so we needed to be with the pack and that's where we are."

A huge close-season influx of players was one of the factors blamed for Palace's woeful start to the season but Pulis is intent on adding some new faces to his squad in January to prolong the feel-good factor.

He added: "Hopefully when the window opens we'll be able to get one or two players in who can give us a lift again and get a run going that will give us a chance."