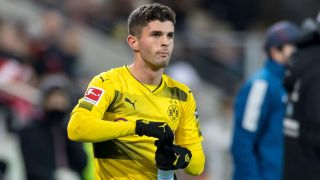 The father of Borussia Dortmund star Christian Pulisic has branded reports of a potential move to one of the Premier League's top clubs "hogwash".

The 19-year-old has developed into one of the Bundesliga's brightest young players since joining Dortmund in 2016, prompting rumours of interest from a number of clubs.

Tottenham are the latest to be linked with the winger, while Liverpool and Manchester United have also been said to be admirers.

However, his father insists there is no truth to the suggestions the player will soon move to England.

"He's linked with a different club every week. I have no idea. His agent right now is working and looking, in close relation with me and Christian, and we're just trying to see what the best phase of his next development will be.

"But there's nothing concrete. Right now, Christian plays for Dortmund and that's where he is planning on playing again next year."